According to the Olympic Charter, established by Pierre de Coubertin in 1894, the goal of the Olympic Movement is to contribute to building a peaceful and better world by educating youth through sport practiced without discrimination of any kind and in the Olympic spirit, which requires mutual understanding with a spirit of friendship, solidarity and fair play. 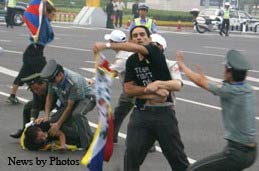 8 Students for a Free Tibet Arrested and Deported for Protesting , which in Beijing is considered Illegal Activity