The Trick-Or-Treat Holiday HALLOWEEN got its name from All Hallows Eve , the eve of All Saints Day. The carved Pumpkin lit by a Candle inside is the most prominent symbol in America and is called a Jack-O-Lantern.

The History Channel at History.com has a great website / page up all about Halloween with several Halloween Videos.

Brad Lidge “Mr Perfect” got the Biggest Save of his career clinching the World Series for the Phillies. He was a perfect 48 for 48 in save opportunities over the season. Lidge said ” It had to be won here – the Fans Deserve it – it had to be here. You go through a lot to be in this position. I wouldn’t change anything in my career. It got me all right here , right now. This is the best it’ll ever be.”

The TV Ratings were low in this ” No-Name” World Series. And for a Record 5th Time in a Row, the World Series did Not last longer than 5 Games. Enjoy the Victory Phanatics.

Bettors cried foul after most Nevada Casinos declared the Phillies the winner of Game 5 of the World Series despite it being suspended while tied in the middle of the sixth inning. The unfinished inning meant most sports books reverted to the score at the end of the Fifth , the last completed inning. That makes the Phillies the winners and means game over for Rays gamblers.

Nevada sports books and gambling regulators received complaints Wednesday from Tampa Bay Devil Ray Bettors angered by rules governing wagers on the rain-delayed contest. But the disputes vary depending on where the bets were placed because rules are not the same at SportsBooks across the state. Phillies Bettors were angry with MGM Mirage Sport Book because their rules say the game is still live until Major League Baseball Declares a Winner, Different from the regular season Rules used.

a shout out to Philly Mike

Jimmy Rollins said it best ” DETERMINATION ! ” interviewed on Fox Sports after the game.

Tensions between USA and Syria on the Rise

The USA Embassy announced it would close Thursday because of a mass rally called to protest a deadly weekend commando attack by US troops on a Syrian village at Sukkeriyah , 8 km / 5 miles from the Border of Iraq.

The Syrian Government Demanded that Washington Apologize for Sunday’s cross-border Helicopter Strike by American Special Forces that Killed 8 People.  US military officials said the raid killed a top al-Qaida “in Iraq” operative who was about to conduct an attack in Iraq.

Syria wants assurances Iraqi territory will not be used again to raid Syria. Iraq also demanded that a crucial security deal under discussion with the USA must include a ban on American troops using Iraqi territory to attack neighboring countries.

The Target was Badran Turki al-Mazidih , a top al-Qaida in Iraq figure who operated a network of smuggling fighters across the border. The Iraqi national also goes by the name Abu Ghadiyah.

Syria’s Deputy Foreign Minister Fayssal Mekdad demanded the US and Iraq apologize for the Attack and asked for Compensation. Mekdad insisted all those killed were Syrians and that this person was killed is a false claim.

In other news , the Federal Reserve agreed to provide $30 Billion each to the central banks of Brazil , Mexico ,  Korea and Singapore – expanding its effort to assist emerging nations.

Early on Tuesday the Consumer Confidence Index fell to an All-Time Low of 38 ,  significantly down from last months 61rating in September and as a point of reference ,  a year ago the index stood at 95. Christmas Shopping Retailers are Expecting the Worst this Holiday Season.  Whirlpool Corp announced it is Laying Off 5,000 workers. Unemployment is on the Rise at Xerox , Merck and a host of other Companies. The News is Bad on MAIN ST for “Poor Joe” – home prices and investments falling , Socialist Banking System “No Banker Left Behind” , high unemployment , recession etc

However it was Quite a Day on Wall St. The Dow began Tuesday at 8176 and closed at 9065, UP 899 Points on the day – The Second Largest One Day Rise on the Street. A Big Late Rally in the Final Hour.

Ralph Nader wants To Put The PEOPLE Back in Charge rather than the Crooks. He’s Asking People to Vote For The BEST Candidate , not the least worse. Nov 4th , People.

Tagged as Consumer Confidence Index, No Banker Left Behind, Poor Joe, Power to the People, Ralph Nader, Up 889 to 9065

Monday the Dow Jones Industrial Average [DJIA] Fell 203 Points to its lowest close in over 5 years. Most all of the decline came in the last 10 minutes of the trading session with Forced Selling by hedge and mutual funds , selling off assets so they can meet investors’ demands for their money back.

Confidence is Razor-thin in this Turbulent Market and the sellers are taking over.

This has been the most Devastating Month for the stock market since 1931.

Crude Oil fell 93 cents to $63.22 a barrel on the New York Mercantile Exchange.

The Yield on the Benchmark 10 Year Treasury Note fell to 3.69 percent.

The US Dollar was higher against currencies except for the yen.

Curlin , Horse Racing’s Top Money Winner with $10.2 million in earnings and considered the World’s Best horse racing on Dirt , was Beaten by the late charge of 13-1 English invader Raven’s Pass. Curlin , piloted by Robbie Albarado , made a Big Move from seventh place to take command while going five wide at the top of the stretch , looking every bit a Repeat Winner of the Classic.

Raven’s Pass and Henrythenavigator are great turf horses. ” It seemed like the synthetics played like a turf course” said the Jockey. “It was a turf race. It absolutely was the Pro-Ride surface He ran his heart out and gave it all he had. He’s a great horse. He’s made over $10 million ” said the Trainer , Steve Asmussen.

Anyone Remember Curlins Win in the 2007 Classic over a MUDDY Track?

Raven’s Pass and Donativum are owned by Princess Haya of Jordan , the wife of Sheikh Mohammed Al Maktoum , the ruler of Dubai who races as Darley Stable. It was a Tremendous Day for Darley as the Stable also won the Juvenile with Midshipman. Money Does Buy Happiness.

How about the Photo Finish in Breeders Cup Classic 1987 , Ferdinand and Alysheba

All of the 2008 Breeders Cup Victory Videos

The Gap between RICH & POOR is widening in Europe and North America.  According to the Paris based Organization for Economic Cooperation and Development [OECD] – Mexico , Turkey & the USA has the greatest inequality in the Rich-Poor Gap.

The rise in inequality is generally due to the Rich improving their incomes in relation to the Middle Class & Low Income People [the Poor].

Resentment is Building on both sides of the Atlantic about what is widely perceived to be the unfairness of the massive bank bailouts engineered by governments , in response to the Financial Crisis.

People ask themselves why 500 billion euros can be approved very quickly to recapitalize banks while an effective poverty-fighting program is rejected due to budgetary concerns.

“To love. To be loved. To never forget your own insignificance. To never get used to the unspeakable violence and the vulgar disparity of life around you. To seek joy in the saddest places. To pursue beauty to its lair. To never simplify what is complicated or complicate what is simple. To respect strength , never power. Above all , to watch. To try and understand. To never look away. And never , never , to forget.”  – the words of Arundhati Roy  http://www.weroy.org

The Dow was Down Another 312 Points to Close Friday at 8379. Casino Stocks were among those Taking a Beating. The Sell-Off is In Force , No Bottom In Sight. Perhaps a One-Day Rally on Monday? Many investors believe the Central Bank will cut rates by another half percent following the end of a two day meeting on October 29. Oil has Fallen $41 a Barrel in one month , closing in NY at $64.15 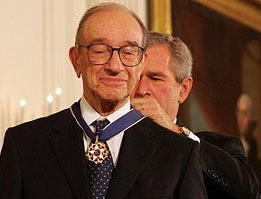 Tagged as Alan Greenspan, Credit Tsunami, I was Wrong, I'm shocked, The Undertaker

Dollar UP Gold DOWN

The Dollar jumped to MultiYear Highs Wednesday while Gold Prices Fell. Investors worldwide are Selling everything , including Gold. Gold for December delivery fell $20.50  closing at $714.70 an ounce in New York and at $720 an ounce in London. Funds were forced to sell assets such as gold to meet Margin Calls and weakness in European economies lifted the U.S. Dollar ,  pushing Gold Prices lower.

The Central Banks of the World are working together coordinating efforts. The world has to prop up the dollar right now. The dollar is the only thing showing value right now because that is where the Big Boys want you. Your playing poker against the people who mark the cards. All the data coming out of the FED shows the dollar is strong. The same people who print the money are the same people who show you the data.

The Dollar is the World’s Dominant Currency – Oil and Gold are Traded in Dollars. For some time , the US has been selling debt to other countries that print other currencies. Foreigners are holding large US Debt making their currency reliant on the Dollar staying strong , otherwise the dollar assets they hold are worth less and their currency is worth less. They can’t get paid if we collapse.

The dollar has rallied as the market crashed and foreign investors bought more United States Treasury Bonds. We’ve seen every asset class drop but Treasuries and the Dollar. Stocks , Commodities and  Corporate Bonds have Plunged. MARGIN CALL , GENTLEMEN. This DeLeveraging has caused what was supposed to be the Big Winner, Gold , to decline.

Stocks ended Sharply Lower Wednesday with the DOW Tumbling 560 Points to close at 8469 after Negative  Corporate Profit Forecasts.  The Economic Downturn is drying up energy demand –  Oil Prices Fell Below $68 a Barrel.  Investors are worried that the “R” Word , Recession , an Economic Slowdown will Sweep the Globe.

The energy markets have also been weighed down by the weak stock market. Investors are more pessimistic about how long it will take the economy to recover from the current global financial meltdown.

The dollar’s strength this week , RELATIVE to other currencies , has contributed to oil’s decline. Investors often buy commodities like crude oil to hedge against a weakening dollar and then sell those investments when the dollar rebounds.

The World-Wide Economy hangs in the balance.