Obama Boy gay. “ Hey Barry, it’s me. If you’re there, pick up already. I was just watching you on Logo, mmm-hmm. Anywayz call me back.” sings Justin Brown aka Obama Boy.

The Obama Boy music video was written and directed by John Duarte and will be taking youtube by storm.

LMAO, a parody of Obama Girl 2008, which received 25 million views online via youtube.

Now I’m gonna make you mine – Cuz I gotta a crush on Obama.

I cannot wait for my soulmate to see you get hard on Romney in debate.

I’m so jealous of the first lady cuz I gotta a crush on Obama – You’re my rainbow colored knight.

Ultimate wealth money cash vault affirmations. I am feeling wealthy. Money is good. Money is energy and flowing to me easily.

My mind is open to the infinite supply of wealth and I allow money to flow freely and generously in my life. I am grateful. There is so much to be grateful for.

Prosperity is everywhere at all times. I claim my right to a prosperous life. Money is raining down on me in multiple streams. Thanks.

Wealth is all around me. The more I enjoy life and contribute to the lives of others, the more money I make. Thank you.

I am a magnet for money. Money comes to me. I like money. Money likes me and is speeding its way to me. There is so much to be thankful for.

I am richly rewarded for all that I give. I am a wealthy person. At this moment, enormous wealth and power are available for me. I am grateful.

I release resistance and allow money to flow freely. Money is forever circulating in my life and there is always a surplus. I am so grateful.

Movies are heating up with MIB 3 out Memorial Day weekend.

Men in Black 3 has overtaken Avengers as #1 movie at the box office. $55 Million first weekend.

There is a formula for money-getting and happiness. Conclusion of Claude Bristol’s “ The Magic of Believing.”

How to project your thoughts [Chapter 7]  Money-getting formula:

A person who desires riches must go to where the riches are. If it’s money you want, go to where money is and where it is being spent.

Money-getting formula: associate with people who have it or who know how to make it. Become personally acquainted with those who have the authority to spend it.

Sell yourself with the right mental attitude and aura. Be properly attired and focused on your goal.

Belief makes things happen. All power is from within the image in your mind.

Use it and become the person you envision. Magic there will be.

Happiness is not from outside. Happiness is a state of mind, which we ourselves are in control of.

“ There is no way to happiness. Happiness is the way.” – Wayne Dyer

Aishwarya Rai shocking weight gain, six months after giving birth to a daughter, the Bollywood actress, model, humanitarian and former Miss World has yet to regain her pre-pregnant figure.

Does the self proclaimed most beautiful woman on Planet Earth, Aishwarya Rai, have any obligation to her fans to lose weight?

A motherhood vs supermodel slim debate about Aishwarya’s weight is the talk of India. It was a fairytale life.

She had it all, picture-perfect looks, winning Miss World 1994 and then marrying Abhishek Bachchan, the most eligible bachelor in India.

“ I always knew I would be successful. So there was no element of surprise.” – Aishwarya Rai 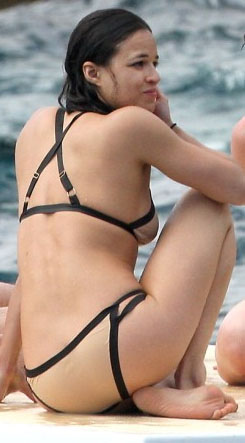 Two for the price of one. 2 Photos = 2,000 words, so this article is too long already. Enjoy, everybody and Good Day.

the Art of Mental Pictures

Chapter 5 of the self-help classic the Magic of Believing by Claude Bristol is the Art of Mental Pictures.

Assume the virtue in your imagination. See yourself doing the thing and go ahead and just do it.

With vision, the people prosper. Act as if. Act as if you were confident and in control of your destiny.

Plant the right kind of seed and reap a rich harvest in due season, like a farmer.

A true mental picture is proper use of the imagination – a clear and dynamic desire.

Faith combined with works, deeds, action is alive and powerful.

Nothing comes between Miley Cyrus and her Jean Paul Gaultier white blazer at the 2012 Billboard Music Awards in Las Vegas.

Ditto for the black and white Christian Louboutin peep toe shoes. At 19, Miley Cyrus is all grown up.

Vidal Sassoon, one man who changed the world with a pair of scissors, has died from leukemia at the age of 84.

Vidal Sassoon got down to the basic angles of cutting and shaping hair. As a piece of art in motion, he made things happen.

Kim Kardashian in a halterneck orange bikini having fun in the sun south of the border on the beautiful beaches of Mexico.

Since Kim Kardashian photos are worth a thousand words, pardon me for rambling. Enjoy.