Why does House Speaker Nancy Pelosi continue to defend the major ethics violator Charles Rangel, the now former Chairman of the powerful Ways and Means Committee?

Members of Congress should be held to high ethical standards. 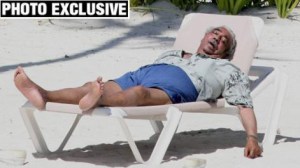 New York Post photo of Charles Rangel lying on the beach in the Dominican Republic.

Rangel’s actions do not pass Pelosi’s smell test and it was her promise to drain the swamp in Washington. Congressman Joe Wilson said it best, ” YOU LIE ”

I guess it’s difficult for Pelosi to pull the plug and drain the swamp, in which she slithers.

Members of Congress SHOULD be held to high ethical standards.

I know the arrogant twenty term Congressman from New York believes he is above the law and believes the tax code does not apply to him but this is terrible PR for the Democrats who are hellbent on destroying Capitalism, the free enterprise system and traditional American values.

Let the sunshine of truth and fair play disinfect the Charles Rangel spectacle and social welfare state of the Democratic Congress.

Hey Rangel, take responsibility for your actions and move on.

” The Swamp has not been Drained.” – John Boehner, House Republican Leader

Crime Pays for Somali Pirates. After a two month stand-off in the Gulf of Aden aboard Saudi Aramco’s Supertanker “Sirius Star” the Pirates of Somalia received a $3 Million USD Ransom Payment by Parachute.

Five of Thirteen Pirates Drowned and Died with their share of the Ransom when their small boat Capsized Fleeing the scene. The others reached shore after swimming for several hours.

The Sirius Star Supertanker owned by  oil giant Saudi Aramco – was seized off the east African coast on November 15 2008. It was the Somali Pirates largest catch to date – with a Cargo of 2 Million Barrels of Crude Oil at the time Valued at USD $100 million – now worth closer to $80 Million.

The crew of the Sirius Star was Safe and the Supertanker has left Somali territorial waters and is headed to Dammam , Saudi Arabia along with it’s Cargo of Two Million Barrels of Crude Oil.

The problem has been out of control with more than 100 ships being attacked off the Horn of Africa in 2008.

The Sirius Star’s release came as the US Fifth Fleet announced that a task force targeting piracy would be launching in late January. Nato and the European Union already have warships in the Gulf and the Chinese Navy has said it will assist.

“We don’t consider ourselves sea bandits – they are those who illegally fish in our seas and dump nuclear waste in our seas and carry weapons of war in our seas. We are simply patrolling our seas. Think of us like a coast guard.” – Somali Pirate   “Hostages don’t do the trick anymore – you can’t use them for Bargaining – since People don’t matter in this outrageous society  – only Commodities do.”

Given all the other people involved in the piracy industry, including those who feed the hostages, it has become a mainstay of the Puntland economy . The town is a safe-haven where very little is done to stop the pirates.

The coastal region of Puntland is booming. Fancy houses are being built – expensive cars are being bought. When the president of Puntland – Adde Musa was asked about the reported wealth of pirates and their associates – he said: ” It’s more than true “.

In southern Somalia , kidnappings against aid workers has increased.  Foreign aid is a major source of income for warlords and bandits, and these fellows are being more aggressive going after it. The UN has European warships to escort the aid ships ( carrying food for the third of Somalis who are in danger of starving to death ) but once the supplies are ashore – the aid groups must try and bribe the local gunmen to get the food to the starving Somalis. That is becoming increasingly expensive  and donors don’t like seeing so much of their money going to bandits – rather than starving women and children.

The Somali Pirates are just as much a part of the Capitalist racket as the rest of the Gangsters. Somali piracy is no longer a minor problem – it threatens the global economy.