Mexico continues to be the number one foreign tourist destination for American travelers, and home to the largest US expat community in the world.

Millions of Americans travel to Mexico every year for tourism and about 150,000 cross south of the border every single day.

The US State Department is currently advising Americans to cancel non-essential travel to Mexico.

Be Strong. Have Fun and keep your head on. 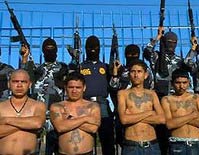 Narco Juniors Drug Gangsters Killing rivals for three hundred dollars in a brutal drug war on the US Mexico border Tijuana teenage drug cartel members can't be given long prison sentences, police and social workers sayA dramatic escalation of the drug war since 2005 has lured many "Narco Juniors" young Drug Gangsters to work for gangs across Mexico. As Tijuana factories are Laying Off - wealthy drug lords are Hiring.Many are Lured by the Big Money Lifestyle of cocaine smuggling and Goldplated Weapons with the Fast Women - Lavish Parties & Respect that comes with it. Miss Sinaloa Mexico Laura Zuniga Beauty Attracted to the Wealthy Lifestyle

Mexican Narco Junior Drug Gangsters are killing rivals for three hundred dollars in a brutal drug war on the US border [Tijuana] that is increasingly recruiting  younger people. A life is worth only $300 ?

Feuding gangs fighting for control of the city’s smuggling routes into California in the violent cities of Tijuana and Ciudad Juarez prize teenage drug cartel members because they aren’t  given long prison sentences.
Mexico’s drug war has become increasingly Brutal. 5700 people were killed in 2008 as drug gangs fought each other and battled troops and federal police sent in by President Felipe Calderon. Recently Police found two teenage boys Beheaded in Tijuana.
By Law under Mexico’s Justice System  – minors involved in organized crime are not treated as criminals and are normally released after counseling in a juvenile delinquency center – making them cheap labor who cannot be imprisoned.
Even those accused of Murder can only be given a Maximum 5 Year Sentence.
The Drug Killings have Scared Off the much needed Foreign Tourists and Investors at a time when the Mexican Economy is falling into a recession because of the Global Economic Crisis.