The Netherlands world cup team returned home to a hero’s welcome on a boat parade. 600,000 Oranje fans lined the canals of Amsterdam and welcomed the second-place Champions as the Winners Holland truly are.

Clearly Holland is the best team to have never won the World Cup. Do some research on 1974 , 1978 and 2010. Unbelievably, heart breaking.

The Netherlands players first went to a private reception with the Dutch PM and Queen Beatrix in The Hague. There the coach [manager] Bert van Marwijk and team captain Giovanni van Bronckhorst were officially knighted.

Then they were helicoptered to Amsterdam where two thirds of a million Dutch people lined the canals to celebrate the Holland national team’s boat parade.

Hold your head high, Winners. Be Strong. Walk in Confidence.

The Netherlands dynamic duo of  Arjen Robben and Wesley Sneijder overpowered Uruguay’s captain Diego Forlan. Noticably absent was Luis Suarez, serving his one game suspension for a red card on his ” Hand of Suarez ” play.

Perhaps the best goal of the 2010 World Cup was Giovanni van Bronckhorst in minute 17. His rocket shot from 30 meters just found the opening in the top right net.

Holland was cruising up 3-1 when in the 91st minute Uruguay scored a second goal, for a very brief time keping their dream alive. but it was Holland’s day and they advance to an all European Final.

We won yet again with the Netherlands as our Lock of the semifinals; having already won our Locks of the 3 group stage games, Round of 16, and Quarterfinals. A perfect 6-0 ATS. Winning’s fun.

Holland [Netherlands] strong second half and two goals by man of the match, Wesley Sneijder, were enough for victory over world number one ranked Brazil [Brasil].

Holland really came alive in the final 45 minutes and played with passion while favored Brazil could not keep up after a terrific first fifteen minutes of the best match by far of this 2010 World Cup.

Just a brilliant match that will be talked about for a long time. Robinho’s first fifteen minutes. The Melo OG – own goal, off the kick by Sneijder.

The amazing designed corner kick :Robben- Kuyt – Sneijder.  Maarten Stekelenburg’s save of a high / right , would be equalizer by Kaka. 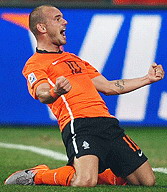 With their fifth win in World Cup 2010 the Netherlands extend its team-record unbeaten streak to 24 games. The Dutch as a team haven’t lost since September 2008.

They advance to the semi-finals, most likely against Uruguay. This bodes well for Germany in their much anticipated quarterfinal with Argentina.

What a Game. It was a shame one team had to lose. The Oranje are very deserving winners and world #1 Brasil have been knocked out of the 2010 World Cup in South Africa. Brazil will be the team to beat on home soil at the 2014 World Cup.