Photos of look-alike Cindy Crawford’s 10 year old daughter Kaia Gerber, in her international debut as a model, wearing a mini skirt has caused a wide variety of response and shock across the internet. 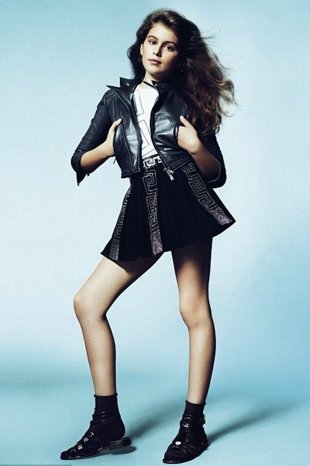 Comments ranged from I think its great for her to follow in her mother’s path to super model stardom! Go Kaia, Go! to  I’m shocked. I’m shocked I tell you, Selling a 10-year old as a 19-year old teenager…Yeah, sex sells, just that this is as immoral as pedophilia itself.

The supermodel called it a “fantastic experience” for her spitting image daughter.

Sure dead ringer Kaia Gerber is following in mom’s footsteps but if it’s sexy miniskirts at 10, whats next, sexier lingerie at 12?

“ I’m so thrilled that Kaia was chosen to be part of the first Young Versace Campaign…There is something so very special about the House of Versace.” –  Cindy Crawford